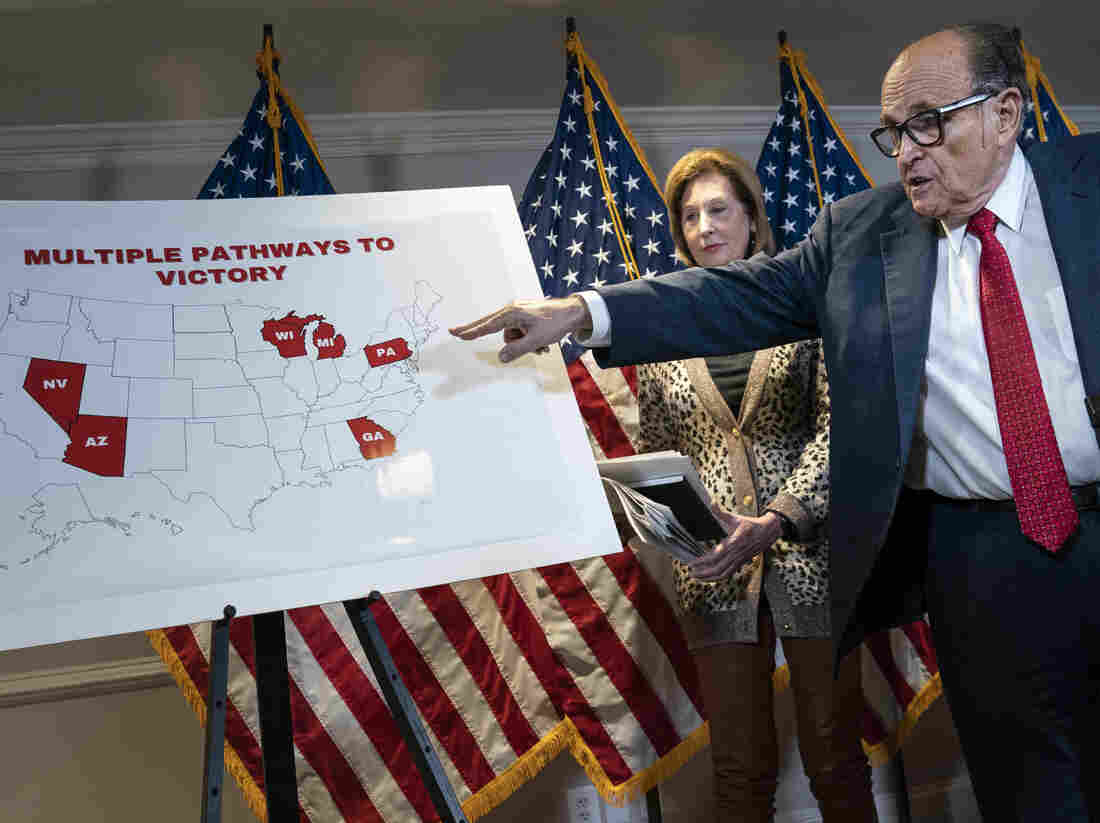 President Trump’s lawyer Rudy Giuliani points to a map Thursday while speaking to the press about lawsuits related to the 2020 election at the Republican National Committee headquarters in Washington, D.C.

Though all evidence points to the contrary, President Trump’s campaign is insisting that Trump has a path to reelection victory and that it will pursue legal challenges to results in swing states such as Pennsylvania, Michigan and Wisconsin. To date, the campaign has lost more than two dozen challenges filed since the Nov. 3 election in which Joe Biden has been declared the decisive winner.

But the president has repeatedly and falsely said the election was riddled with fraud, and in a lengthy, conspiracy-filled news conference in Washington, D.C., his attorneys, led by former New York City Mayor Rudy Giuliani, claimed they had hundreds of affidavits from voters and election workers that would prove Trump won the election.

Giuliani alleged that cheating in Democratic-controlled cities, such as Philadelphia, Detroit and Milwaukee, was part of a “nationwide” voter fraud conspiracy. He said they “made significant mistakes, like all crooks do, and we caught them” — although he backed up the allegations with vague assertions and theories that have yet to be argued in a court of law.

The campaign’s continued push to question the results comes as states are in the process of certifying votes and as almost every top election official in the country — both Republican and Democratic — insists the election ran smoothly with no signs of widespread fraud.

That press conference was the most dangerous 1hr 45 minutes of television in American history. And possibly the craziest. If you don’t know what I’m talking about, you’re lucky.

Michigan counties completed a canvas of their results — in which Biden is some 154,000 votes ahead — after two Republican canvassers in Wayne County, home of Detroit, agreed Tuesday night to reverse an earlier position and certify the count. They had refused to do so earlier in the day, citing some discrepancies in the vote tallies.

Then on Wednesday evening, the two canvassers reversed themselves again, signing affidavits saying they wanted to rescind their votes, with at least one canvasser saying she had received a call from Trump[6]. The state said it was too late to change the vote, but the Trump campaign insisted it meant the Wayne County tally was no longer certified.

The campaign has made no secret it hopes to delay and challenge the results enough in Michigan and other states in the hope of getting GOP-controlled state legislatures to override the popular vote totals and appoint the electors instead. It’s a far-fetched scenario, and Republican legislative leaders have signaled for the most part they want no part[7] of such an effort.

However, several news outlets reported that Trump has asked the Republican leaders of the Michigan Legislature to fly to Washington to meet with him on Friday.

Acquire this Domain
You can acquire this site’s domain name! We have nurtured its online marketing value by systematically curating this site by the domain’s relevant keywords. Explore our content network – you can advertise on each or rent vs. buy the domain. Buy@TLDtraders.com | Skype: TLDtraders | +1 (475) BUY-NAME (289 – 6263). Thousands search by this site’s exact keyword domain name! Most are sent here because search engines often love the keyword. This domain can be your 24/7 lead generator! If you own it, you could capture a large amount of online traffic for your niche. Stop wasting money on ads. Instead, buy this domain to gain a long-term marketing asset. If you can’t afford to buy then you can rent the domain.

About Us
We are Internet Investors, Developers, and Franchisers – operating a content network of several thousand sites while federating 100+ eCommerce and SaaS startups. With our proprietary “inverted incubation” model, we leverage a portfolio of $100M in valued domains to impact online trends, traffic, and transactions. We use robotic process automation, machine learning, and other proprietary approaches to power our content network. Contact us to learn how we can help you with your online marketing and/or site maintenance.

Your browser sent a request that this server could not understand.
Size of a request header field exceeds server limit.

Your browser sent a request that this server could not understand.
Size of a request header field exceeds server limit.

This website uses cookies to improve your experience while you navigate through the website. Out of these cookies, the cookies that are categorized as necessary are stored on your browser as they are essential for the working of basic functionalities of the website. We also use third-party cookies that help us analyze and understand how you use this website. These cookies will be stored in your browser only with your consent. You also have the option to opt-out of these cookies. But opting out of some of these cookies may have an effect on your browsing experience.
Necessary Always Enabled
Necessary cookies are absolutely essential for the website to function properly. This category only includes cookies that ensures basic functionalities and security features of the website. These cookies do not store any personal information.
Non-necessary
Any cookies that may not be particularly necessary for the website to function and is used specifically to collect user personal data via analytics, ads, other embedded contents are termed as non-necessary cookies. It is mandatory to procure user consent prior to running these cookies on your website.
SAVE & ACCEPT
Generated by Feedzy